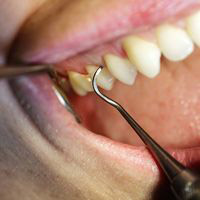 You should never ignore small specks blood in the sink or on your toothbrush while brushing and flossing. Bleeding gums are usually a telltale sign of early stages of gum disease, usually referred to as gingivitis. This condition can progress rapidly without treatment. Considered two of the best dentists in Chesapeake, Drs. Barclay and Jeffrey Weisberg can provide the vital care you need at our office. They can perform scaling and root planing to remove plaque and tartar from below the gum line that is causing inflammation to improve your oral health and protect your smile.

The primary cause of bleeding gums is the accumulation of plaque around the base of the tooth. Once plaque hardens and calcifies it is referred to as tartar, which attaches to the enamel of the teeth and can be difficult to remove. Plaque is a sticky film of bacteria that, when combined with food particles, can form acids that can affect the teeth and gums. The bacteria feeds on the food particles and irritates the gums, causing them to bleed. Inflamed, red, and swollen gums can cause pain, bad breath, and tooth sensitivity.

The Progression of Periodontal Disease

Bleeding gums are a major symptom of gingivitis. This condition is the first stage of periodontal disease and typically results in inflamed or irritated gum tissue at the base, or neck, of the tooth. The gums will be slightly more red than the pink color of healthy tissue and bleeding may occur. If gingivitis is not treated, it can lead to early periodontitis. In this stage, pockets begin to form in the gum tissue as it pulls away from your dental roots. The gums will appear more irritated and there will be slightly more bleeding upon contact.

As periodontitis progresses, the tooth may loosen as the gums begin to recede and as bone deteriorates. Deeper pockets will form around the tooth, allowing bacteria to affect the bone, and up to 50 percent bone loss can occur at this stage. Eventually, the severe effects of periodontitis can lead to significant bone and tooth loss.

To protect your oral health there are simple practices you can do to keep plaque and tartar at bay and preserve a healthy smile. Maintaining proper oral hygiene and a strict regimen of brushing, flossing, and using mouthwash can keep your teeth free from plaque and tartar and stop the progression of periodontal disease. It is also essential to visit our office, where Drs. Weisberg can remove tartar from the gum line that you are unable to reach on your own. With regular appointments, we can help manage gum disease that has already developed and prevent serious side effects from developing.

Bleeding gums are a sign of serious oral health concerns that should not be ignored. Contact our practice online or call (757) 483-6297 today to schedule an appointment.